Our guest researcher and blogger Rachel Sayers returns to whatgrandmawore for a second post on Irish history!

‘On Sundays at the Carnacun chapel the family [….] would pass by the men in knee breeches, frieze coats, and stovepipe hats; inside the church, the men sat on one side, the women hiding their faces behind shawls on the other.’

– Taken from the re-collections of Irish novelists, George Moore, on his childhood growing up in rural Ireland in the 1850s.

George Moore’s recollections of a rural childhood in County Mayo as part of the Anglo-Irish aristocracy that ruled Ireland at this time detail the clothes that his father’s tenants wore on a regular basis. From the description of the men’s clothing, it appears that they had not yet ‘adopted’ trousers, (Fig. 1) and were still wearing the knee-breeches of their ancestors a century previously. Moore’s account of Ireland in the 1850s and 1860s must be looked at retrospectively as someone who was nuanced towards the adage of ‘looking down’ on their tenants, or even thinking that they were better than them. This attitude by Moore towards the working classes of Ireland is somewhat shocking to a modern reader; Ireland was still recovering from the harrowing affects of the famine only ten years ago. George Moore’s description of Irish clothing in the period after 1850 consequently echoes other memories of Irish working class dress by the pre-dominantly upper classes and tourists visiting Ireland after the expansion of the railways during the 1850s onwards. Their views are centred towards a ‘simple’ view of Irish life and fail to discuss the reality of why these clothes where in tatters. People simply did not have the money to buy new clothes and any clothes they did buy were second, third, or even fourth hand or made from remnants of old clothes. In an overview of Irish clothing in the earlier part of the nineteenth century an anonymous author dictates that many of the second-hand clothing available to the working classes in Ireland came from western and south-western Scotland. Additionally, these items could already be in a state of dis-repair before they reached Ireland, subsequently propagating the view that clothing some Irish wore were of such a poor state the clothing was essentially only fit for the poorest of the poor.

If the dress of the working classes was of such a poor standard (indeed, the anonymous author above deliberates that people wore their clothes day and night, and if the clothing was removed it was nearly impossible to re-wear the articles), then what where the dresses of the middle to upper classes during this period wearing? In this period men and women from the emerging middle classes in Ireland wore the same fashions as their European counterparts albeit with an emphasis on home-spun products such as linen, cotton and tweed or Irish made products such as Carrickmacross lace and fine crocheted cuffs and collars. In Fig. 2 we see a well-dressed woman of the 1880s collecting money for charity from presumably her poor tenants or poor neighbours in her town or village. The difference in clothes are striking; she is dressed in fashionable ‘English’ clothing whilst the cottagers are dressed in second-hand un-fashionable ‘Irish’ clothes.

By the late 19th century any semblance of a ‘true’ form of Irish dress had all but died out due to centuries of oppressive measures to curtail any form of ‘otherness’ in dress in the native inhabitants of Ireland.  Christian Huck writes that as early as the mid-1500’s laws were enacted to ensure that Irish people ‘wear no apparel but after the English fashion’ and that by the early 1700’s most dress available to wear in Ireland was of English manufacture and style. Therefore, it is not surprising that dress in late nineteenth century Ireland mirrored English dress due to centuries of subjugation and oppression of the Irish way of life.

Between 1850 to 1900 there was an upsurge of production and manufacture of ‘native’ goods in relation to Irish linen, cotton and lace as aforementioned above. It was not uncommon in better weather to see fields full of bleaching linen as you travelled about Ireland on the railway or by horse drawn carriage. Irish linen is and remains the finest linen in the world albeit today linen made in Ireland has reverted to being incredibly expensive for the average wage earner. Though Fig. 3 is an advert for 1918 similar adverts for linen workers would have been a daily occurrence in papers across Ireland enticing people to work in cities such as Belfast which would even gain the nickname ‘Linenopolis’ due to the volume of linen produced within the city.

Most of the intact dress from this period that has survived in museum collections across Ireland pre-dominantly comes from the middle and upper classes. These artefacts normally include everyday dress, occasional and formal wear, household textiles (domestic and hobby textiles) and other dress such as religious dress. Pre-conceived notions of whoand howpeople consumed or manufactured dress between 1850 to 1900 has recently been challenged within the canon of Irish dress history. Whilst most of the dress that does survive is anonymous in terms of who made it and where it was made there are several journal articles that move away from the Protestant-centric view of consumption of dress to a more well-rounded view of Irish dress consumption in this period.

In an article on the growth of the middle classes in late nineteenth-century County Waterford Eugene Broderick discusses contrary to established historical opinion the majority of Anglican i.e. Church of Ireland workers did notwork in industries related to clothing production including tailoring and dress-making. Broderick’s findings are taken from the results of the 1871 census of Ireland and although they offer an overview of one city in Ireland these findings disrupt the notion that to be important in Ireland in this period you had to be Protestant or from within the confines of the Church of Ireland elite.

Broderick’s article concentrates on a time when there was a growing interest in Irish culture particularly Irish clothing, Irish arts and sports and most importantly the Irish language as seen in a poster advertising a ‘language collection’ for the Gaelic League for Irish Lessons in Fig. 4. Fig. 4 expertly plays on the ‘Irish’ fashion versus ‘English’ fashion narrative with the depictions of Hibernia and Britannia on the left and right of the advert respectively.  Douglas Hyde, who would go onto become the first President of Ireland after partition in 1922, wrote in 1894 that it was important to re-establish a sense of Irish national dress and to ‘set our face against this aping of English dress.’ Hyde further deliberates that Irish women must be encouraged to spin their own wool to make suits for themselves and their men folk to stop the influence of ‘English’ fashion and wonders why men in Connemara in the west of Ireland wear home-spun and home-made garments whilst men in the big cities do not. It is worth nothing that Hyde perhaps forgets the availability of new and second-hand clothing from England in port cities like Dublin, Belfast and Cork where in Connemara these goods may not have been readily available.

At a time when the ‘Gaelic League’ and the ‘Gaelic Athletic Association’ were first founded the availability in terms of monetary attainment and the time that went with spinning your own wool meant that perhaps for most ordinary working-class Irish people Irish made clothes were a dream rather than a reality. Romantically speaking it is somewhat nostalgic of twenty-first century readers to think of Irish people in the late nineteenth-century dressed in home spun garb but as I have pointed out this was not necessarily a reality. Olwen Purdue converses that towards the end of the nineteenth-century with the growth of the industry in the Ulster in the north of Ireland the population growth of small towns and cities exploded with Belfast growing from a population of 75,308 in 1841 to 386,947 by 1911. This reflects a growing trend across industrialized Europe with a greater increase in man-made yarn which possibly mad Hyde’s idea of home-spun wool and yarn impossible for small cottagers due to the mass production of commercialized material, yarn and wool. Purdue’s article further points out that in 1894 Belfast mills produced 644,000,000 miles of yarn- how was a woman in a small cottage (see Fig. 4) in rural Ireland meant to compete with the machine age? 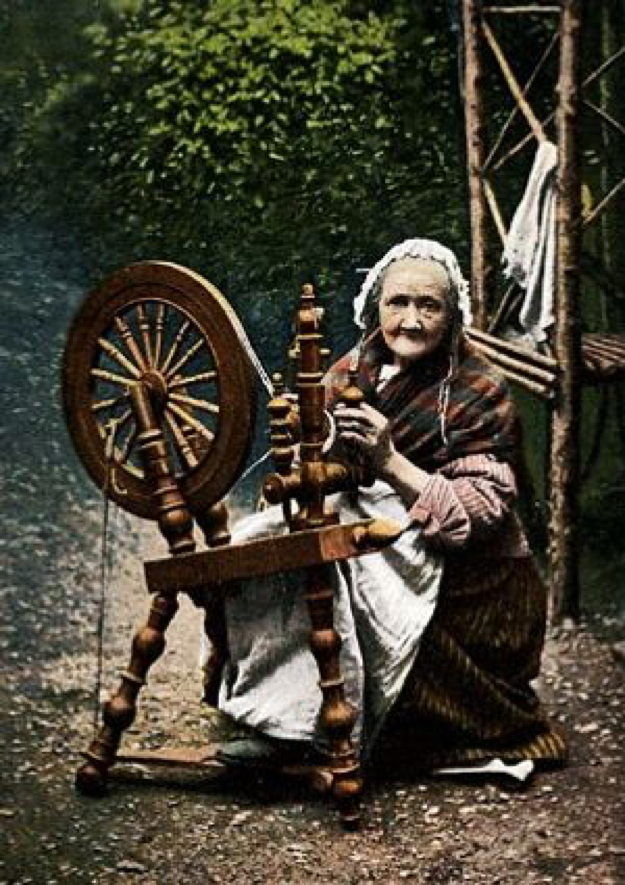 Throughout this article I have tried to give an overview of the affects of industrialization had on what Ireland between 1850 to 1900 wore. The trajectory of fashion in this period for the middle and upper classes mirrored fashion trends across the western world; it is the poorest of Irish people that did not wear crinolines, bustles and leg-o-mutton sleeves both out of practicality for their working lives and due to the monetary cost incurred. Whilst fashion in the earlier part of the nineteenth-century tended to be somewhat more ‘Irish’ fashion in this period was more of a universal style albeit made with a focus on homemade Irish linen and cotton. As we move into the twentieth century there was a greater emphasis on re-introducing Irish fashion and style in the growing un-rest against English occupation of Ireland that subsequently led to the partition of Ireland in 1922.

I hope you have enjoyed reading this article and look forward to learning more about Irish fashion in the twentieth century!