It’s quite unusual to find the works of Madame Gres, Karl Lagerfeld, Alexander McQueen, and Christian Dior, amongst many other cherished designers in an exhibition titled The Vulgar: Fashion Redefined. The Barbican Art Gallery has installed a fashion exhibition deliberately designed to question our ideas of taste and vulgarity, depending on the various perspectives taken by the wearers, or viewers.

(Although the above and below dresses do not feature in the exhibition, the works of Alexander McQueen are perfect examples for discussions surrounding the concept of the vulgar, questioning ideas surrounding beauty and femininity.) Alexander McQueen Voss dress. c2001. Red and black ostrich feathers and glass medical slides painted red. Sølve Sundsbø / Art + Commerce. The Metropolitan Museum of Art, New York. 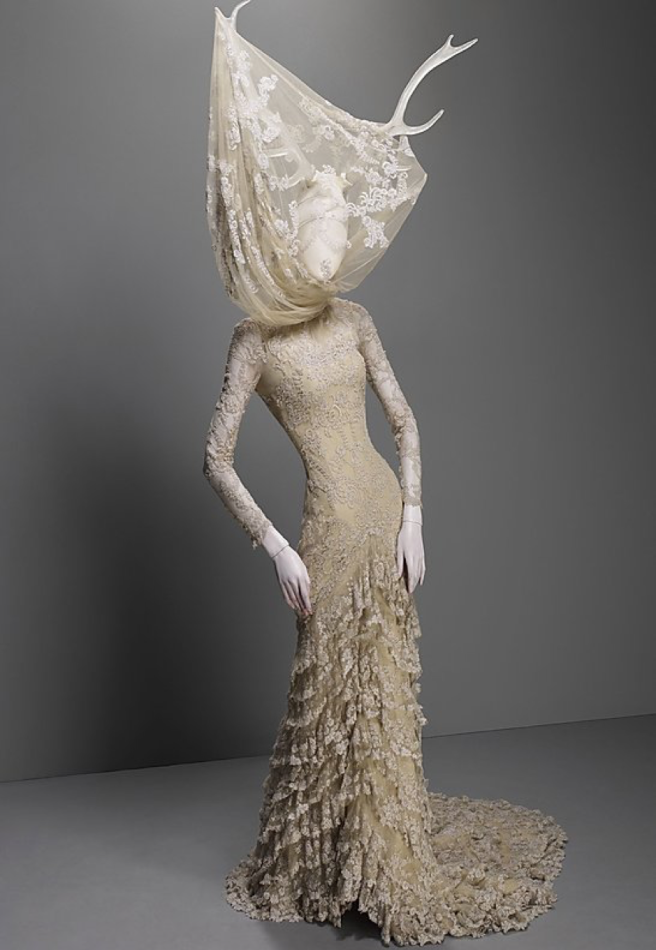 This is a cleverly executed exhibition, the brainchild of fashion curator Judith Clark, and psychoanalyst Adam Phillips. The couple live and work in London, and the concept of the vulgar crosses into both of their academic and interdisciplinary fields. The breadth of couture and costume which features throughout the exhibition spans from the 18th century onward – adding to the surprise a visitor experiences when they find a mantua gown from the 1700’s, placed in close proximity to a Pam Hogg ensemble created in 2016.

So – how did Clarke and Phillips manage to persuade several couturiers, museums, and private collectors alike, to donate their treasured garments to an exhibition surrounding the term ‘vulgar?’ 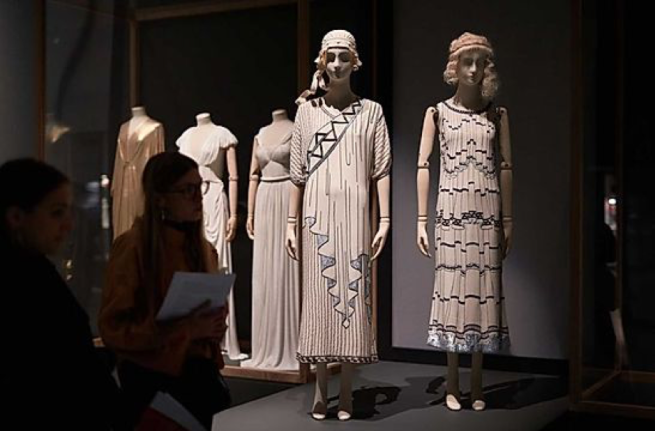 Let’s make it clear that both Clarke and Phillips did not want these garments labelled as merely vulgar nor objects correlated with negativity and scorn. From the beginning of the exhibition, the visitor is encouraged to question and form their own opinions surrounding the meaning of vulgarity. Through the insightful text panels printed on the gallery walls which are provided by Phillips, indicators of the different themes incorporating ideas of the vulgar are presented throughout the exhibition space. Visitors are prompted to understand why each garment has been specifically chosen for the context of the theme, intellectually stimulated through meaningful discussions surrounding the description, application, and cultural relevance of the word ‘vulgar.’

So, what can be regarded as vulgar?

The first theme of the exhibition was based on ideas surrounding copying. Whether it was those classic Grès dresses inspired by Grecian design, or Yves Saint Laurent’s Mondrian dresses, commercially imitated by thousands of 1960’s sewing pattern manufacturers, the reproduction of fashion was the first step into the world of vulgarity. Does the mass market imitate the style of the upper classes? How about both John Galliano and Martin Margela’s literal printed copies of designs and patterns for gowns? And how do we feel when the fashion industry copies/obtains influences from references deriving from historical artworks (Laurent and Westwood in particular here). Fashion finds influences from all forms of culture. But does this make it vulgar? And then the visitor moves into the theme of exhibitionism – for those who love to show off, flaunting the most extravagant and luxurious pieces of haute couture. It is here that Clark curates an exaggerated 18th century mantua, worn for occasions at the royal court. The hips are huge, the extreme silhouette formed by wearing several layers of thick petticoats. An example of a manuta, worn by only the highest members of the social hierarchy, can be seen below: 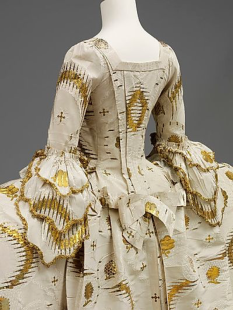 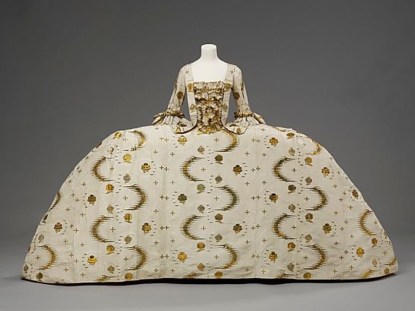 It is clear that only the richest members of society were permitted to wear the manuta. However in contrast to the older costumes, contemporary garments designed by Gareth Pugh in 2016, make the very most of avant-garde materials and bright colours. As well as Pugh’s in-your-face garments, pieces designed by Pam Hogg, exhibit styles created with state of the art modern plastics, leathers, sequins and PVC. A 1920’s Lanvin robe de style gown, donated by the Victoria and Albert Museum, is assembled in opposition to the ensembles belonging to John Galliano’s infamous Dior collections. 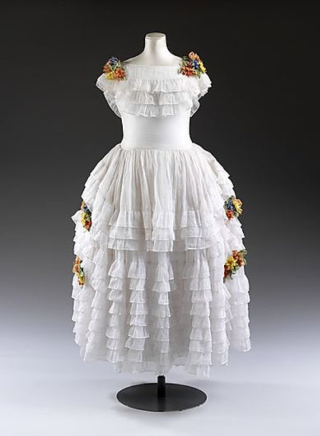 It is clear that this area of the exhibition was created to celebration to the big, the bold and the beautiful. It was all about being over the top.

But who rules taste? Who decides what is vulgar and what is not? The exhibition continues upstairs, displaying various 19th century etiquette guides, as well as numerous controversial advertisements commissioned and published for Vogue, Vogue Italia, and British Vogue. As Phillips goes on to elaborate, fashion magazines are regarded as ‘guardians of taste.’ The vulgar ‘always exposes what it is trying to conceal. It exposes the cover up of good taste, and the cunning of bad taste.’

The Vulgar goes on to present debates surrounding exposure. It is quite common nowadays to see lingerie being worn as outerwear on the catwalk, but think about a time when revealing flesh was not so approved of. Let us go back to the 1960’s – the arrival of the miniskirt, and iconoclastic and futuristic collections being produced by the likes of Andre Courrèges and Paco Rabanne.

And the arrival of punk sees Vivienne Westwood and Malcolm McLaren completely subverting ideas of sex and fashion during the 70’s. Even if we think of that iconic Kate Moss dress worn during the 1990’s, we see Clark and Phillips’ ideas surrounding exposed and extreme bodies come to light. Vulgarity also incorporates connotations of the kitch, the cheap, the common and the popular. The 1960’s saw the arrival of paper dresses, easily disposed of and printed with Pop Art images of consumer goods (think Andy Warhol and those tin-can prints). Jeremy Scott for Moschino is the King of branding; using many popular logos and graphics as the adornment for many of his garments.

So what do we think of the vulgar now? Well of course, whatever one person regards vulgar, the other person may not. This was a thoughtful exhibition, curated successfully by Clark and Phillips, dividing the garments according to themes but retaining the linking ideas which connect the dissimilar ideas of the vulgar together. Whether you are showing off, copying, being inspired by the past, or exposing your skin, British milliner Stephen Jones aptly sums up vulgarity in one simple sentence: The exhibition closes on the 5th of February, 2017.