I have asked the question many times before, particularly in regards to the work of Japanese designers. I also think of designers that have placed the structure and composition of garments in the forefront of their design visions, Madeleine Vionnet, Madame Grès ect.

But the one designer who stands out, a man who was experimental and innovative, determined to have every garment he produced be deemed as a piece of art, with an impeccably tailored silhouette fitting his couture clients perfectly. His name – was Charles James; a British couturier who worked in both America and Britain.

Charles James was born in 1906, England, to an affluent family, and a father who was disapproving of his son’s choice of professional career. James was forced to work within architectural design (which would prove essential to the development of his couture career) before moving into millinery design – opening a hat shop in Chicago.

It was during this period where James would have began experimenting with moulding, fitting, tacking and perfecting the structure of accessories – which would ultimately influence his later obsessions with the precise construction and fit of the female form.

The Metropolitan Museum of Art holds some wonderful examples of Charles James garments. Many now know Charles James for his ‘Clover Leaf’ and ‘Butterfly’ gowns. They have enormous skirts that take us back to the days of crinoline fashions. But how did Charles James keep the silhouette of these gowns structurally secure?

This is where we really see James’ expertise in garment design. Obsessed with geometry, the moulding of fabric, and new conceptual approaches to the creation of couture fashion, James produced complex ‘understructures.’ As The Met Museum states:

This [gown] was built using two separate understructures of boning and stiff interfacings to give it shape and balance. The fifteen-pound skirt was engineered to rest comfortably on the hips, and, unlike the cage crinoline, to effectuate a graceful glide rather than a back and forth sway. With artistic bravado, James heightened the visual drama by separating the luminosity of ivory satin and the muted reflectivity of ivory faille on the upper and lower sections with a curvaceous black velvet swath, which further defines the serpentine effect of the four-lobed skirt. As he considered himself to be a sculptor, engineer, and architect, James thought this design his greatest achievement.

As curator Timothy Long writes in his chapter on Charles James within the book, London Couture: 1923-1975, British Luxury, throughout the 1930’s, ‘James’s interest went beyond trend and into […] artistic exploration […]. This process of using a single idea or trend to inspire a line, or an entire collection, is the cycle of fashion. James, however, applied this notion to his entire body of work, in which the possibilities of certain ideas became life-long obsessions.’ (Long,2015, 75.) 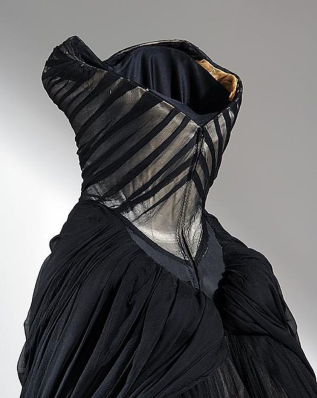 Charles James effectively appealed to an audience of clients who were considered both artistic and modern arbiters of style and ideas. From his early boarding school days he had already befriended Cecil Beaton, but his work also appealed to writer Virginia Woolf, actresses, Millicant Rogers, Marlene Dietrich, socialites Diana Mitford and Nancy Cunard, and even fellow couturier Elsa Schiaparelli, amongst many others.

Top, above, and middle image: 2009.300.816. ‘Butterfly’ Charles James dress. Silk, synthetic. c1955. The Metropolitan Museum of Art, New York. According to The Met, this dress weighs 18 pounds, with twenty five yards of tulle used in its making.

For a designer who created such complicated designs, his choice of colour palette remained relatively simple but his materials lavish and luxurious. His appeal was created by his classic silhouettes which complimented the female body, emphasising the hips, such as this gown below, epitomising the 1930’s elegance, generated by the figure-hugging bias-cut. 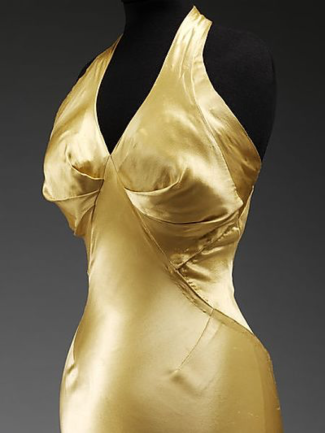 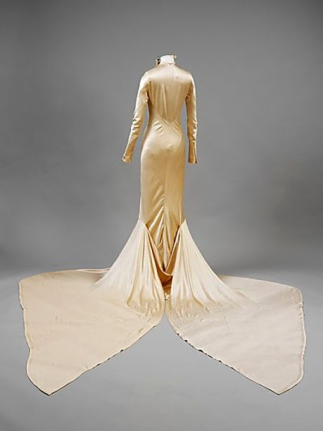 The beauty of the design lies in its deceptive simplicity and the designer’s complete understanding of the potential of the fabric. Darts and seams shape the smooth ivory satin, which clings and drapes around the body in order to enhance the graceful figure. James said, ‘all my seams have meaning – they emphasise something about the body’. 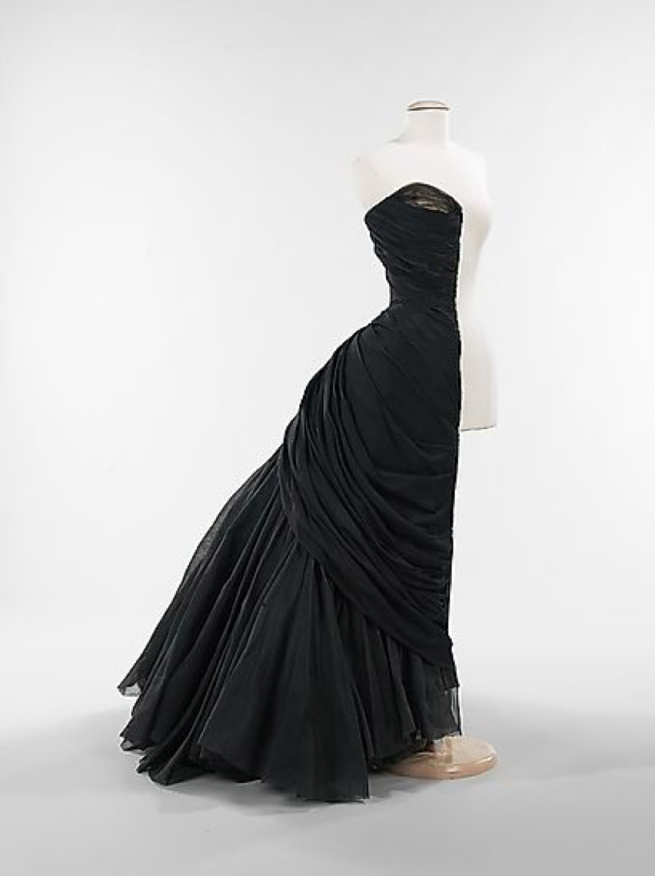 The above images show objects collected and donated to The Met by some of James’ most devoted clients – muslins which show James’ work techniques and creative processes in regards to garment design. These muslins are three-dimensional, cut-away to show the complicated stitching and various panels needed to create his multi-layered ballgowns. For fashion historians, it is delightful to see physical, what someone may call draft designs, rather than studying sketches recorded on paper. Charles James was known for his fiery temperament. He was difficult to work with and was renowned for his explosions of rage and anger. By 1937, his London salon was closed. It was during this period that James was to then move to America, creating some of his most iconic dresses such as the ‘Butterfly’ during his later years as a designer.

Charles James took an entirely different but wonderful approach to fashion design. He produced designs which defied conventional dress silhouettes but proved how the boundaries between fashion and art are fluid, relying on one another for inspiration and innovation.

Conceptual, yet still timeless, James placed femininity at the forefront of his mind. Passionate but argumentative, creative yet still misunderstood, obsessive but meticulous, James manipulated fabrics in ways that other designers could hardly dream of.

Some of his last words before his death in 1978? “I am what is popularly regarded as the greatest couturier in the western world.” (Jacobs, Gowned for Glory, Vanity Fair)

He certainly knew of his artistic talents which would still influence designers today around the world.